This is a pretty common problem. I think it’s a question every developer has asked at one time or another: “I want to pass in a comma-separated list of values, then convert it into a table.”

Every company I’ve ever worked for has had a function that does this. Everyone does it differently. It’s never efficient. I’ve seen it done in CLR, I’ve seen it done as a multi-statement table-valued user-defined function (which we all know is the devil’s work). The CLR works, but it’s a black-box to the average DBA or SQL developer. The multi-statement TVF performs terribly, but has never been used heavily enough to make it to the top of my tuning list.

This morning, I saw Pinal Dave (twitter|blog) post on his blog about this topic, and he used a really elegant XML-based solution. It’s one of those solutions that’s so simple, it’s incredibly hard.

When I got to my desk this morning, I immediately wrapped Pinal’s code into a function that was backwards compatible to a multi-statement TVF version and performance tested them head-to-head.

I won’t bother you with the other function definition, suffice to say, it’s one of the uglier ones I’ve seen.

To test, I created a table, and populated it with 1,000,000 random comma-separated integers:

First, let’s see what the old multi-statement TVF does for performance:

On my laptop (4 cores, 8GB RAM, all SSD), it chugs for about 16 minutes. A million rows of input (and six million output) was probably overkill on sample size. The relevant IO and Time stats:

Ouch.  The use of that temp table (which gets scanned once per row) really kills I/O performance. It’s the equivalent of scanning the table 600 times. What’s the plan look like? It’s actually impractical to include the plan in truly meaningful way. But here’s a screenshot:

It ran for about about 7 minutes on my laptop (twice as fast!). The relevant IO and Time stats:

But what’s the plan look like? It’s wide (I Photoshopped it to be less wide), but actually readable: 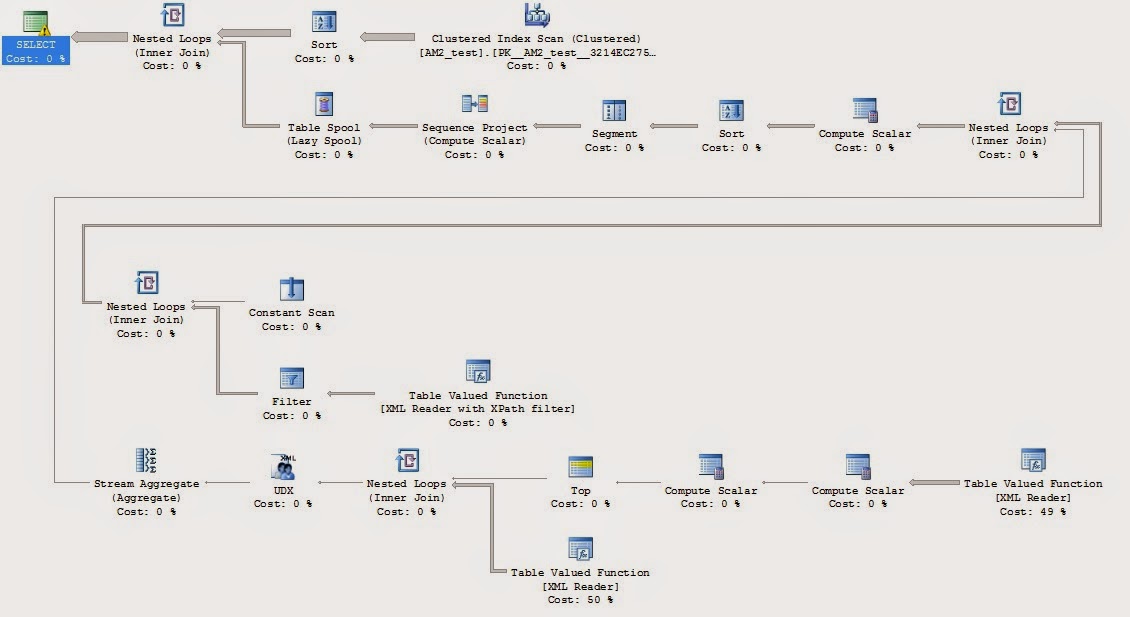 Are there better way to do this? Maybe. Probably. The beauty & curse of SQL is that there are a million ways to do the same thing, and each way has it’s own pros & cons. This version seems to be one of the better methods that I’ve seen.

Update (2015-04-23): My coworker pointed out that my initial version generated the IDs and ordered output according to the alphabetical order of the output Values. I’ve made a change to behavior to make that less confusing.
For example, passing in “C,B,A” originally generated output as:

I’ve now fixed it so that the ID now represents the indexed order of the position in the original delimited list. ie, passing in “C,B,A” now generates output as:

Update (2015-04-24): Aaron Bertrand (twitter|blog) has a much more comprehensive post about performance when splitting strings into tables using different methods. Definitely worth a read. In particular, he includes CLR in his comparison–something my (lack of) CLR skills kept me from including it as a comparison on my own list. SQL is terrible at string manipulation, so using CLR makes sense here, as long as you have the skills to write & support it.

Aaron also has a post about using table-valued parameters (TVPs) to pass in lists, and avoiding the need to split delimited lists altogether. As he points out, this requires re-writing more code, but has it’s own set of costs/benefits that might make this the best solution for you.